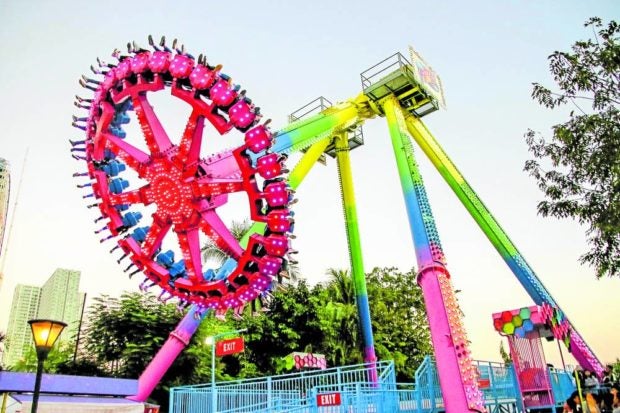 One of Star City’s exciting rides

Amusement is something we all look forward to when we plan a vacation. This is probably why theme parks always top the things-to-do list of every holiday itinerary. For children, teenagers and adults alike, an amusement park is where one gets to create some of the best memories with family, friends, colleagues or a special someone and relive them time and time again.

For nearly 30 years, Star City struck the perfect blend between fun, entertainment, shopping and the thrills of an adventure that everyone seeks even on a brief respite from everyday living … at a price most ordinary Filipinos could afford. Indeed, when one thought of a relatively affordable weekend getaway, Star City was the only place that came to mind.

Housed within the CCP complex, it rose at the site of the erstwhile Philippine Center for Trade Exhibitions (Philcite) which housed events such as car shows, book fairs, heavy machinery exhibitions, and even firearms displays. But after the birth of his daughter Thalassa, Star City founder Fred J. Elizalde let loose his brilliant creativity when he pitched the concept of converting Philcite into a full-fledged theme park for families to enjoy. The massive concrete structure soon became the venue of a year-round toys and gifts fair, supplemented by carnival attractions that the masses enjoyed. But unlike the itinerant “perya” that popped up for a week or two during a town fiesta, it was meant to become the go-to place for weekdays and weekends.

In the three decades that followed, Star City became truly big on family fun, where a world of excitement, entertainment and education awaited visitors. Rides that spun, twirled or zoomed … shows that provided spills and thrills … a nivean haven in negative 17 degrees to counter the heat of everyday living … toys, clothes and other merchandise that were easy on the pocket … and fun-filled scoops of food and goodies all blended together in a one-stop shop of merriment spread out over 35,000 square meters that boasted the only all-weather, air-conditioned amusement park in the country.

Indeed, there was simply no way that kids and even adults could not enjoy Star City. For many, even the simple joys of roaming around the amusement park with its cacophony of sights and sounds, brought pure unadulterated joy as a quick fix from the emotional wringer of today’s challenges.

But shortly after midnight on Oct. 2, 2019, Star City was gutted by fire. The cherished holiday dreams of children were shattered when the country’s oldest and most famous amusement park went up in smoke. And hundreds working at the park lost their jobs.

Park officials remained upbeat about the future of Star City, since the outdoor rides were untouched. It has been two long years since, with complications brought by the pandemic thrown in, but members of the management team were adamant to see the amusement park brought to life once more.

So, come Jan. 14, Star City will reopen softly, welcoming visitors from 2 to 10 p.m. daily for the entire month, but moving to a Thursday-Sunday schedule from February to August, as it pushes toward full completion through the rest of the year.

Comprising two floors on its original 3.4-hectare footprint, it will feature a more spacious but simple layout. Favorite rides will again be around. Kids can savor bump cars, mini Viking, playland, quack quack and frosty train. Adults can look forward to the tornado, muzik express, bump car smash and jumping star. Families can expect the Grand Carousel, Star Wheel, Telekombat, Wacky Worm and the Egyptian Spinning Coaster. And those who derive their thrill from extreme rides will again be treated to the Star Frisbee, Jungle Splash, Surf Dance, the Seahorse Viking and the inverted rollercoaster called the Star Flyer.

Ride all you canA Star Pass, priced at P400, will entitle the visitor to ride-all-you-can access. Entrance to Snow World, if bought at the gate or online will be worth P160. To promote contactless transactions, the public will be encouraged to buy online, where QR codes can be sent to the guest via email, printed or saved on a cell phone, and then scanned at the gate to gain entry. However, people may still buy their tickets at the gate.

Health protocol prescribed by IATF like temperature check at the gate will be implemented, along with social distancing at the queues, provision of alcohol dispensers throughout the park, and sanitation of all rides in between cycles. Personnel and guests will be required to wear masks. Because of the current IATF Alert level 3 status, all guests must present their vaccination cards at the gate.

In the reconstruction, management made sure that the renovated building, including Aliw theater, is structurally sound and compliant with fire detection and prevention rules and regulations so the public can be assured of their safety.

Public excitement has already built up about the reopening of the park. As the year 2022 kicks in, beautiful memories of time spent with friends and family at the country’s foremost amusement park will be rekindled and relived to exhilaration.

After all, Star City has been the Filipino favorite in terms of family fun and entertainment for the past 30 years. And the hiatus has only made the feverish anticipation to relive those thrills more gleefully intense. See you all on Jan. 14!

The hottest entertainment news straight to your inbox

Don’t miss out on the latest news and information.