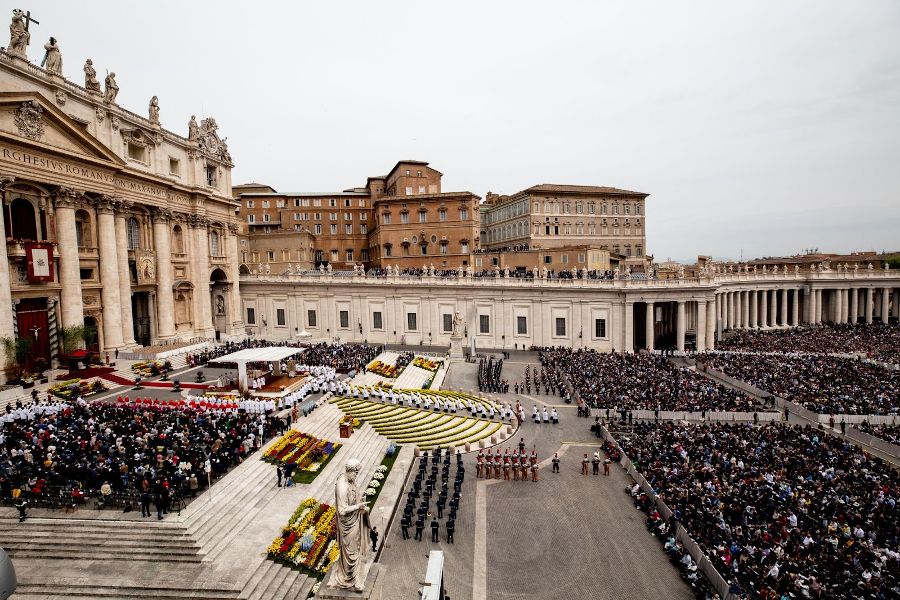 Before the start of the long drive on April 12, the flowers were blessed by Bishop Hans van den Hende of Rotterdam, chairman of the Dutch bishops’ conference.

VATICAN CITY — Earlier this year, some Dutch Catholics were dismayed to learn that a 37-year Easter tradition would not continue in 2022.

The Netherlands, known for its fields of flowers, had for more than three decades donated the colorful tulips, daffodils, and hyacinths that decorate St. Peter’s Square for the pope’s Easter Sunday Mass at the Vatican. The custom was put on hold for two years because of coronavirus restrictions, and in 2022, the Dutch florist who had organized the initiative since 2015 said he no longer had the sponsors to continue the project.

The tradition seemed fated to end. But Dutch Catholics in Rome and the Netherlands were not easily discouraged, and they stepped in to ensure the floral finery would once again adorn St. Peter’s Square for the celebration of Christ’s Resurrection.

“We were disappointed and thought: This is a beautiful tradition. If Mr. [Paul] Deckers cannot find sponsors again, why not try to find another flower artist to do the same job?” Father Antoine Bodar told CNA via email.

“The floral gift from the Netherlands and the province of the Dutch Church to the Pope in Rome is too special not to give it continuity,” he told SIR, the news agency of the Italian bishops, in January.

Father Bodar is the rector of the Dutch Catholic church in Rome, Sts. Michael and Magnus, which is on a side street just a few steps from the Vatican.

He rallied his countrymen and earlier this month he announced that the tradition “goes on” with chief florist Piet van der Burg, who will arrange the plants, trees, and flowers before the Easter Mass. “At Easter, the Dutch floral splendor can be seen again in St. Peter’s Square,” the rector wrote on his church’s website on April 5.

“Overwhelmed by positive reactions from growers, sponsors, and many others, and after intensive consultation with various stakeholders in the Netherlands and the Vatican, the efforts of many have shown that this year, after two years of pandemic, Dutch flowers will once again be in St. Peter’s Square in Rome.”

The flowers and plants arrived at the Vatican by truck this week, after a days-long journey from the Netherlands. Before the start of the long drive on April 12, the flowers were blessed by Bishop Hans van den Hende of Rotterdam, chairman of the Dutch bishops’ conference.

“These flowers and plants have been grown with craftsmanship,” the bishop said at the Keukenhof Flower Park in Lisse, the flower capital of the Netherlands. The flowers, he said, “go to Rome for the great feast of Easter, when we celebrate the Resurrection of Christ. The flowers will grace St. Peter’s Square as Pope Francis pronounces his ‘Urbi et Orbi,’ his blessing over the city and the world. On the feast of the Resurrection of the Lord, this floral splendor will be fully displayed.”

He added: “God gives the blooming power and growth, and as human beings we are allowed to cooperate with creation through the talents we have been given.”

In 2018, Dutch media reported that 50,000 flowers, weighing around 30 tons, were brought to the Vatican, where they were arranged by 25 people. The Vatican said for that Easter 2022, professional florists from the Netherlands and Slovenia, in collaboration with Vatican gardeners, would work “the entire day of Good Friday to prepare and finish the decorations by the following day.” After his Easter “Urbi et Orbi” blessing, Pope Francis always makes a point of thanking the Netherlands for the gift of flowers.

“In this square, the joy of the Resurrection is symbolized by flowers, which also this year come from the Netherlands, while those in St. Peter’s Basilica are from Slovenia,” he said in 2019. “A big special thanks to the donors of these splendid floral gifts.”