Gone but not forgotten: River Oaks home a tribute to lost mid-century gem

Stephanie Tsuru was driving with her son-in-law when she had a wild idea: She’d heard about a beautiful new home, and she wanted to see it.

They turned the car toward Tiel Way in River Oaks and when they got there, sneaked up the driveway to get a look at the lush, wooded grounds and peek in windows. Tsuru wasn’t even house shopping, but she rushed home to tell her husband about her find.

“I knew Frank would love that house. There was an open house that very afternoon, so two hours later we were there,” said Stephanie of her husband, Frank Tsuru, CEO of both Momentum Midstream and Indigo Natural Resources. “I knew within two minutes of walking in the door that it was the place for us.”

The Tsurus, who lived in a similarly sized home in Memorial, made an offer and closed on 2 Tiel Way in mid-July.

Finally, after four years of ups and downs, the lot at the entrance to one of River Oaks’ most scenic streets has a finished home and a family ready to move in. 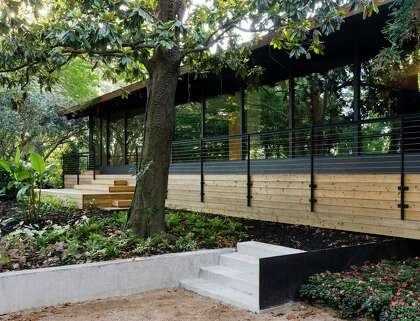 In late May, architect Christopher Robertson walked through his latest project with microfiber booties over his shoes as workmen handled finishing touches inside, pavers were still being laid in the driveway and landscapers used flats of annuals to spruce up the curb appeal.

The 6,540-square-foot home designed by Robertson and his architect/wife, Vivi Nguyen Robertson — of Robertson Design — didn’t start as a spec home, but it ended up as one just the same.

Its saga began in January 2017, as Carolyn and James Robertson’s hopeful project to restore and renovate a midcentury gem — the original home on this 2-acre lot.

In 1961, Houston developer and oilman George Mitchell hired Karl Kamrath of the MacKie and Kamrath architecture firm to design a home for his sister and brother-in-law, Maria and Alando Jones “Jay” Ballantyne. Jay was a well-known surgeon at MD Anderson Cancer Center, and the couple raised their seven children in the home that remained in the family until 2015, when Maria Ballantyne died. 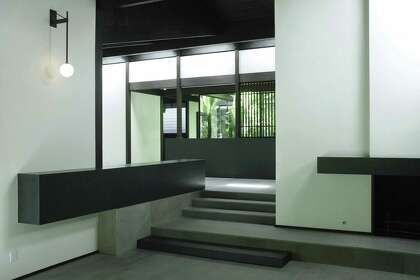 The Ballantynes’ low-slung, L-shaped home was touted as one of the city’s best examples of midcentury architecture and was the subject of many home tours through the years, but when the Robertsons purchased it in mid-2016, it came with issues.

Christopher Robertson said his parents had every intention of updating and restoring the original home — in fact, he told them he “would not be responsible for a wholesale removing of the existing house and putting up something that is totally different.” As their contractor examined the home’s infrastructure, though, they discovered termite and water damage and other issues, and the project’s potential cost kept scaling upward.

So in January 2017, when a bulldozer reduced the home to a pile of debris, Houston’s architecture community was buzzing with the news. In a city known for demolishing older homes, it was one more painful blow.

Christopher and Vivi Robertson have always leaned modern in their design aesthetic, and a vacation in Japan where they saw the work of renowned Japanese architect Tadao Ando firsthand added another layer. They returned to Houston inspired to use more concrete in simple but beautiful ways, and to stay connected to nature and organic materials.

Though the Tiel Way home has no obvious Asian motifs — no paper-thin sliding screens or curved roofs — it has a distinctly Japanese feel. That’s what immediately hooked Frank Tsuru, a native Midwesterner whose grandparents immigrated to the U.S. from Japan in 1910.

The Robertsons designed a spacious 6,540-square-foot home largely in white, gray and black, with Texas limestone or white oak flooring, and a large bar, kitchen counters and bathrooms in limestone, marble and granite.

Siberian larch is a durable, bug- and rot-resistant wood, and the Robertsons used it on ceilings and in other decorative ways inside and out, all stained black. 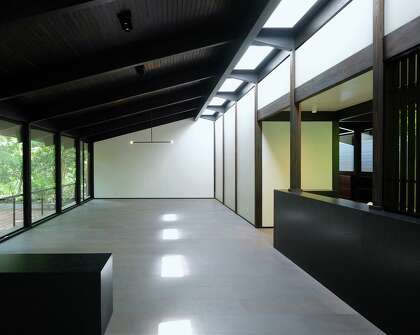 Christopher Robertson was determined that this new home would be an original design but also an homage to Kamrath and the home he built — a “Robertson design with Kamrath DNA baked in,” he said. One thing that was re-created was a striking front living room cantilevered over a ravine with a floor-to-ceiling window that makes you feel like you’re in a treehouse.

In the Ballantynes’ version of this room, it was where the musical family kept their grand piano and often sang together. The new version is nearly identical — minus the piano — with a built-in banquette along one wall and a simple, cozy fireplace.

Kamrath’s design included a long corridor that organized the bedrooms, and the Robertsons kept it that way, too, with two good-sized guest rooms and a large primary suite at the end, with a luxurious closet and plenty of Carrara marble in the bathroom. A fourth bedroom — a flex room — was located in another part of the home.

That corridor was also created as a library for James Robertson, an avid reader and collector of books, with shelves lining the lower portion of the outside wall the full length of the hall. Stephanie Tsuru is a book lover, too, so it’s likely those shelves won’t be wasted.

Architecturally, Kamrath’s design used a 6-foot grid, and the Robertsons honored those measurements as well, adhering to it more strictly than Kamrath did, Christopher said. And the home’s silhouette — its roof pitch and shape — are similar, with less noticeable exposed rafters.

Beyond that, everything else is different. The Ballantynes had a smallish kitchen, bathrooms and closets. The new house has a big open space that encompasses a kitchen with a 16-foot island and a breakfast area large enough to be a full-on dining room plus a large family room.

One of the most striking new features is an interior courtyard, a vertical bubble in the center of the home that brings in natural light and looks as lush as the backyard and ravine.

The home was well underway — the shell constructed and mechanical components installed — when Hurricane Harvey stalled over Houston, causing widespread flooding. The ravine that backs up to Tiel Way filled with rainwater, and virtually every home on the street suffered some damage.

The Robertsons’ project had 22 inches of water, prompting them to halt work to let it dry out and then elevate the structure 4 feet. Once the water had receded, they dug up dirt from the ravine to help fill the land where the home would sit.

Not only did the work stop, it added a huge expense to an already growing tab. The Robertsons paid $3,375,000 for the property, understanding that the restoration could cost as much as a new house. By the time it was finished, the cost had doubled. 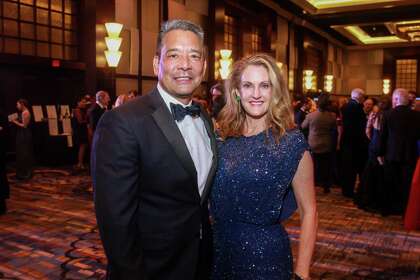 In June of the following summer, Carolyn Robertson, who was retired from a career in computer programming and was in poor health, died. A grieving James continued meeting his son at the construction site to monitor progress, but in late September 2019, the Robertsons’ world was rocked again: James died unexpectedly of a heart attack.

“My dad loved architecture, and he loved me and was happy to give me an opportunity to build stuff for him, but now it’s a spec house,” Christopher said of the home before the Tsurus saw it. “There are so many things that would be different if it was a spec house, but it was designed for my dad just like he wanted it.”

Heartbroken, Christopher was left to finish the project his parents had been so excited to launch.

“I couldn’t come back in the house until about three weeks after my dad died,” he said. “That was a very sad first trip back.”

Though the Tsurus are excited about a new chapter of their lives — both are turning 60 and heavily involved in the city’s philanthropic community — the home’s journey from demolition to their purchase has had a number of sad turns.

The home the Tsurus have lived in for several years is very traditional and bedroom-heavy. Their children are grown now, though, and both are excited about a shift to a new home and, likely, a more minimalist home life.

Frank Tsuru was preparing for his first trip to Japan this year, but the coronavirus pandemic squashed that. For now, he’ll settle for the fresh style in his new home.

“It has Japanese architecture all over it, it really does. When I walked in and saw bamboo out the window, it looked just like a Japanese tea house,” Frank said. “It was something I’ve never seen before, actually.” 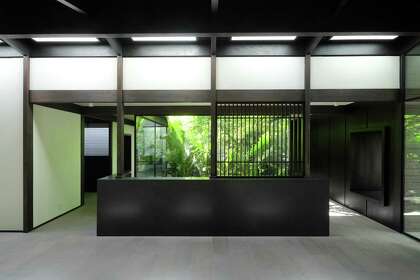 “We are fairly private, but this (home) may change some things,” he said of the potential of hosting events there. “We’re very involved with the philanthropic community in Houston and, if it helps, obviously, we will be there to help them.”

The Tsurus said that very little of their current furniture will work in their new home, so they’re working with interior designer Courtnay Tartt Elias and hope to move in this fall.

“When we walked in, that house spoke to us. That’s why we made the decision (to buy it),” Stephanie said. “Now I feel like the house and its history belong to the city, and we will share it if called upon.”

Any cookies that may not be particularly necessary for the website to function and is used specifically to collect user personal data via analytics, ads, other embedded contents are termed as non-necessary cookies. It is mandatory to procure user consent prior to running these cookies on your website.