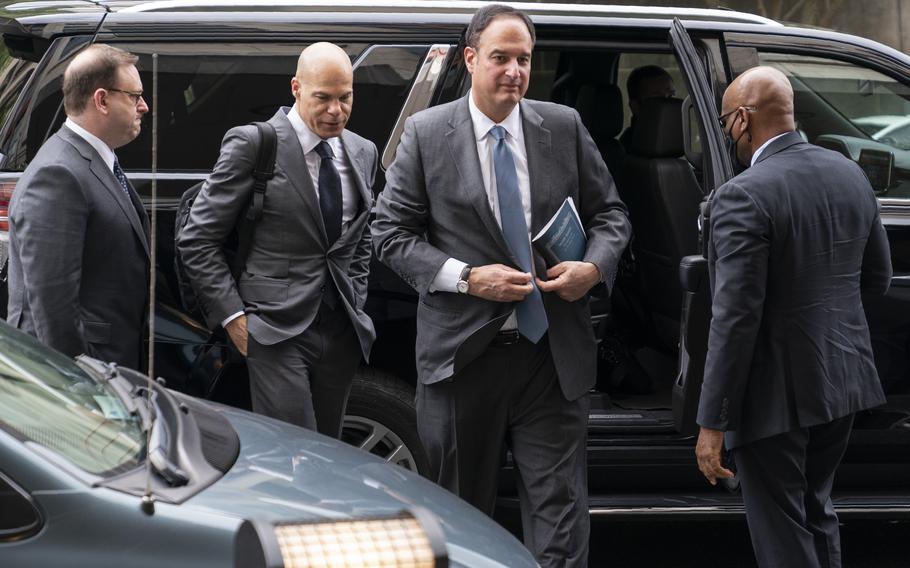 Michael Sussmann, a cybersecurity lawyer who represented the Hillary Clinton presidential campaign in 2016, arrives to the E. Barrett Prettyman Federal Courthouse, Monday, May 16, 2022, in Washington. Sussmann is accused of making a false statement to the FBI during the Trump-Russia probe. (Evan Vucci/AP)

WASHINGTON — A lawyer for Hillary Clinton’s 2016 campaign who is charged with lying to the FBI early in the Trump-Russia probe sought to “use and manipulate” federal law enforcement to create an “October surprise” in the final weeks of the presidential race, a prosecutor alleged Tuesday at the start of his trial. Defense lawyers told jurors he never lied.

Michael Sussmann is accused of misleading the FBI during a September 2016 meeting by telling the bureau’s top lawyer that he wasn’t acting on behalf of a particular client when he presented computer data that he said might connect Russia to then-candidate Donald Trump. In reality, prosecutors say, he was acting on behalf of the Clinton campaign and another client who had provided him with the data.

The goal was to generate an “October surprise” of FBI investigations into Trump and negative news coverage of him, prosecutor Brittain Shaw told jurors. He lied to the FBI because he knew the bureau would consider the data less credible if it knew it was being presented on behalf of the Clinton campaign, she said.

Sussmann’s lawyers sought to counter each of the prosecution’s allegations, denying that he lied and portraying him as a well-respected attorney whose representation of Democratic clients was well-known to the FBI and not anything he would hide.

In any event, Bosworth said, it would be impossible for prosecutors to prove Sussmann made a false statement because only he and the FBI lawyer he met with, James Baker, were present and neither took notes. And five and a half years after the meeting, Baker’s memory of what was said is “clear as mud,” Bosworth said.

Sussmann’s trial is the first arising from special counsel John Durham’s investigation into the FBI’s original probe into Russian election interference and potential ties with the Trump campaign. Though Durham was thought to be focused at least initially on misconduct by government officials during the course of the Russia investigation, the Sussmann case alleges wrongdoing by a tipster to the FBI rather than the FBI itself.

In recognition of the case’s politically loaded nature, Shaw urged jurors to put aside any feelings about Trump, Russia or Clinton.

Rather, she added, “We are here because the FBI is our institution. It should not be used as a political tool.”

At issue is a 2016 meeting in which Sussmann gave Baker, the FBI’s then-general counsel, computer data gathered by another of his clients that purported to show furtive contact between computer servers of the Trump Organization and Russia-based Alfa Bank. That connection, if true, would have been explosive at a time when the FBI was examining whether the Trump campaign and Russia were conspiring to sway the election.

The FBI investigated but ruled out anything suspicious or nefarious. The internet activity instead reflected what Shaw described as a “spam email server” used to send out marketing.

An FBI agent who assessed the data, Scott Hellman, testified Tuesday that it relied on “far-reaching” assumptions and did not support a conclusion of any communication between Trump and Russia, let alone a secret backchannel. He said knowing where the information came from and who it was provided by would have been a key “data point” in assessing its credibility, though he said he probably would have done the same technical analysis no matter what.

The defense team on cross-examination sought to show that Hellman did not do all he could have done to determine where the data was coming from, and pointed to internal FBI communications suggesting the FBI in 2016 knew more about the origins of the material than Hellman was saying.

Bosworth told jurors Sussmann took the computer data seriously because it appeared to show “weird contacts” between Trump’s business organization and Russia and because it was given to him by Rodney Joffe, a client who Bosworth said was such a respected technology executive that the FBI had asked him to be an informant.

He told jurors Sussmann had sought out the meeting to give Baker a heads-up that a story about the computer data might be published imminently by The New York Times. Shaw, the prosecutor, had a different take, saying Sussmann had grown frustrated a reporter he’d been working with had not yet written about the data and wanted to prompt investigations by the FBI that could in turn lead to news media coverage.

But after the meeting, the FBI asked the newspaper to delay publication of the forthcoming story. That’s the opposite of what the Clinton campaign would have wanted, Bosworth said, proving he wasn’t acting on the campaign’s behalf during the meeting.

Durham was appointed in 2019 by then-Attorney General William Barr to identify any misconduct as the U.S. government examined potential coordination between Russia and the 2016 Trump campaign. An investigation by an earlier special counsel, Robert Mueller, did not establish a criminal conspiracy between Russia and the campaign though it did find that Russia worked to aid Trump’s election bid.

The Alfa Bank matter was a peripheral part of that investigation, and the allegations around it weren’t even mentioned in Mueller’s report.

Durham’s work has produced three criminal cases. One against a former FBI lawyer ended with a guilty plea. Another case, against an analyst charged with lying to the FBI, is pending.