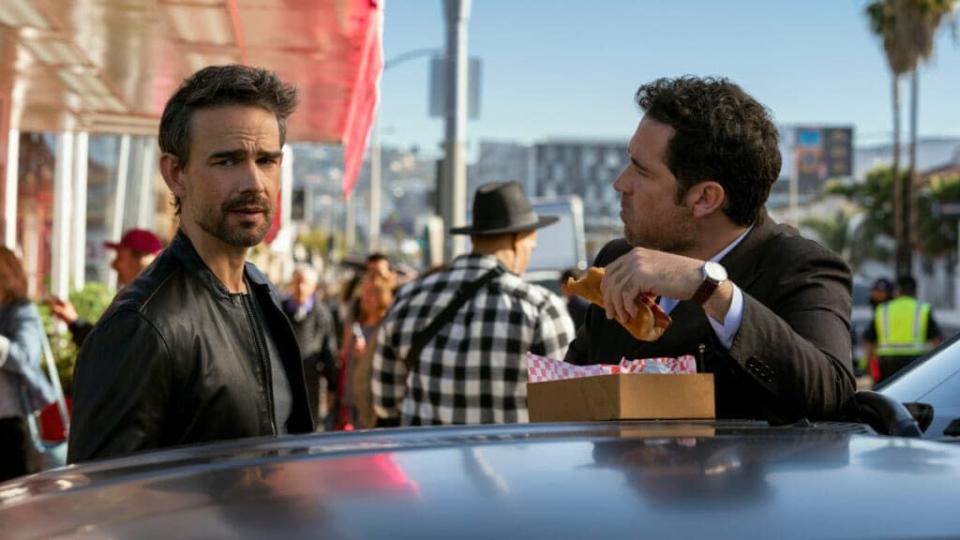 (Warning: This post contains spoilers for Season 1 of “The Lincoln Lawyer” on Netflix.)

For Netflix’s adaptation of “The Lincoln Lawyer,” Christopher Gorham plays charismatic tech mogul Trevor Elliot, who is accused of murdering his wife and her lover. Manuel Garcia-Rulfo’s Mickey Haller inherits the case from another attorney after that attorney is found dead in a parking garage.

The series is based on the novels by Michael Connelly, and this season follows the story of the second book, “The Brass Verdict.” Now, if you know what that means (or you read the book), then you probably already figured out the end of the tale.

If not, then you might’ve been surprised when the show revealed that Trevor did commit the crime and, while he escaped a conviction, he couldn’t outrun karma. A brass verdict means that a guilty person faces consequences for their crimes outside of a courtroom — which is exactly what happens to Trevor when he’s shot in broad daylight.

“It’s not a happy ending, but there is some sense of satisfaction that he got what he deserved,” Gorham told TheWrap.

Gorham broke down the end of the series, and the nuances of playing a covert criminal in the Q&A below.

What appealed to you about playing a character like Trevor?

Well, the first thing was it was a David E. Kelly show, and I’ve been a fan of his. And then I read the script, and I thought the script was great. And it was just, it was a really interesting, complicated character that I just felt like I could sink my teeth into.

He’s very charismatic. There’s a lot of layers to him, and it’s really, really hard to tell when he’s lying. I know that’s probably a lot to do with great writing, but also I wanted to ask how you made that come alive on screen?

You set it up right in the beginning, right? You’ve got these two big scenes that introduce Trevor in that first episode. The first one sets up with: This is a guy who is powerful. This is a guy who is impatient. This is a guy who has a lot on the line, and he’s not messing around, which is important to know. But then in the second scene, you really see him open up and become vulnerable, and I think it’s unexpected, especially for Mickey. Because Mickey is feeling very unsure. Mickey needs this case, but he’s unsure because the evidence seems pretty clear that this guy’s guilty. But he’s looking for a reason to jump on board. Trevor gives it to him in a really unexpected way because he shows his emotional truth and at the core of that is that this guy loved his wife. I felt like that was something that I could really grab on to, and I think that’s something that I can play as true. And it tracks all the way through the season, no matter where the story is.

I have to say, I haven’t read the books. So, I was surprised with how the story ended for Trevor.

Yeah, well, it’s funny because the title of the thing gives the whole thing away, but if you have never heard the brass verdict — well, then you’re in the dark. I was in the same place. I had never heard that term.

Also Read:
‘Lincoln Lawyer’: How Manuel Garcia-Rulfo Grappled With the Ethics of Being a Defense Attorney

I’m sure that the show will attract many fans of the books, but for people who haven’t read them, what kinds of reactions are you expecting?

Actually, I’ve gotten a couple of texts from friends and relatives who get to the end of Episode 9 and they text me like “I knew you were gonna get away with it!” Then I get it, like 45 minutes later, “Oh my god.” So, it’s been great. I feel like a lot of the audience is having the same experience that you had because you spend a lot of the show not sure if he’s gonna get off but then it’s like, of course he’s gonna get off. And then when he gets killed, it’s so shocking and, I hope, has a complicated sense of satisfaction in that. You feel like he had it coming, in the immortal words of Roxie Hart, but at the same time, your heart goes out to the woman who shot him because now her life’s ruined. It’s not a happy ending, but there is some sense of satisfaction that he got what he deserved.

It’s so crazy how his entire demeanor changes when Mickey confronts him, once he’s found not guilty. But Mickey knows he did it.

Well, it’s once he’s off the hook, right? Once he knows he’s safe, then it’s like, the costume comes off. Mickey described him as an addict, and I think it’s apt. I think it’s a really good description. This is a guy who’s gone back to his drug, and he’s on his trip.

Trevor and Mickey have a great dynamic. How did you curate that with Manuel?

Well, we had such a good time working together and he’s a great guy. There’s a certain amount of trust that has to exist to really be able to play in those scenes. He’s an actor who’s always listening. If you’re listening to what the other person is doing, then you’re reacting honestly to it and the scene can actually grow in ways, and we found moments like that — little looks back and forth to each other, little physical interaction. Now, you’ll notice the times when I touched him physically, there are not a lot of them. But they’re always in places where Trevor is feeling invincible. It’s a way that he shows dominance over Mickey. Particularly in that big reveal scene at that cocktail party where Trevor is just freely poking him and grabbing his arm and just showing that physical dominance. That stuff’s not written in the script. That stuff comes out of us working together and feeling comfortable being vulnerable and open to it.

That’s so interesting, and I don’t think I would have ever picked up on it.

And you shouldn’t. It just all goes into the feel of the relationship, and you shouldn’t really notice a little ingredient, right? It’s like the taste of the whole meal.

I also think that the ongoing debate throughout the series about the ethics of being a defense attorney gets fairly interesting, especially knowing that Trevor actually did commit that crime and Mickey helped him get off. What did you make of that within the show?

This show is not about a deep examination of the justice system in America. I think the justice system in America definitely needs deep examination, but we do touch on it a couple of times. Mickey’s daughter asks him, “How do you defend these guys?” He tries his best to explain it, and the truth of the matter is, it’s sorry, can you hear that beeping a little bit? Of course. The truth of the matter is that the system depends on giving everyone the opportunity to have an effective defense whether or not they’re guilty. And the reason for that is because this justice system is so powerful that, as we’ve seen plenty of times in real life, the justice system can convict someone for things they didn’t do. So you need to have effective defense against that. The system doesn’t always work perfectly. In this story, it doesn’t work perfectly. You’ve got a guy who committed this crime who gets found not guilty, and then the justice system is done with him, like you cannot be charged again. It’s over. That’s a flaw, it happens all the time. But that doesn’t mean you throw out the whole system, right? Because it’s not perfect, but you just keep trying to make it more perfect.