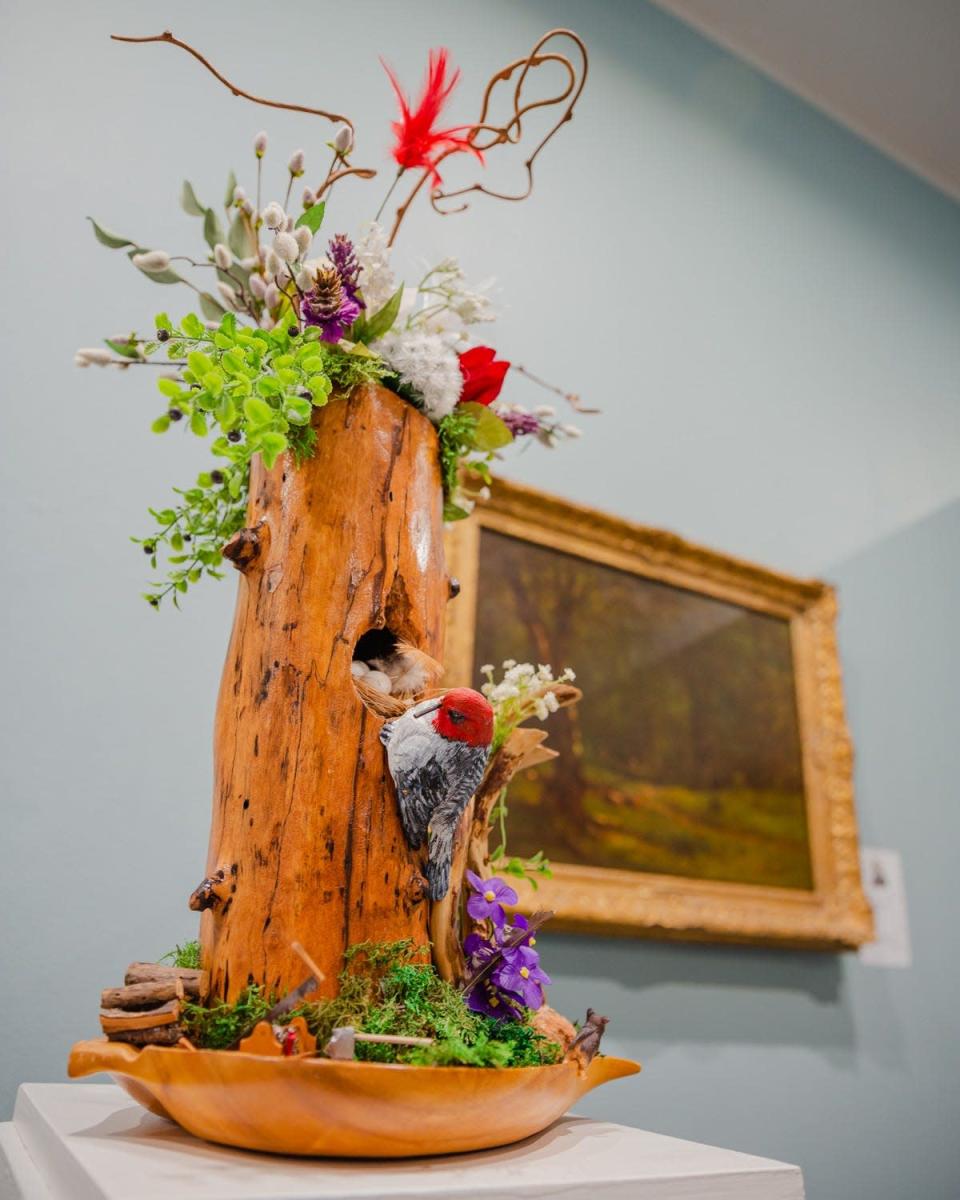 Editor’s note: This article has been updated to correct the sickness Virginia Morrow had as a child.

Expressing herself through art — whether it be drawing, painting or music — has been important in Virginia Morrow’s life since childhood.

Morrow, 100, is this year’s recipient of the Springfield Art Museum’s Art In Bloom People’s Choice Award. Her floral arrangement, based on the 1865 oil painting “The Woodchopper” by George Inness, received 129 votes. In addition to the title, Morrow received a $500 prize.

Creating her arrangement began more than two years ago. Morrow’s work was supposed to be featured in the museum’s 2020 Art In Bloom, but the event was canceled due to the COVID-19 pandemic. This year’s Art In Bloom was the museum’s first since 2019.

Art In Bloom participants are asked to create a floral arrangement based on one of the museum’s paintings. Morrow said “The Woodchopper” was not her initial choice, but in the end she felt especially inspired by Inness’ painting.

Morrow used a piece of wood that her granddaughter’s husband cut from a walnut tree as the base. The wood features a natural woodpecker hole that she filled with a fake bird’s nest and eggs. A fake woodpecker rests on the side. A bouquet of green, red, purple and white flowers sits within the top of the wood. Small details, including fake stacks of chopped wood and an ax rest within moss at the bottom of the arrangement in a round piece of teak wood from Hawaii.

After two years of waiting to share her work, Morrow was excited to hear she brought home an award.

“I was so surprised that it was the voter’s choice,” she said with a laugh.

Morrow was born and raised in Modale, Iowa during the Great Depression. At age 10, she became ill with Rheumatic fever and was sick in bed for three months. During this time she could not walk, so she began to draw.

Morrow said her father built her a trapeze, which allowed her to regain physical strength.

As she recovered and got back on her feet, Morrow fell in love with dancing, specifically to big band music. She enjoyed dancing with her mother and taught her brothers. Later in life, Morrow would teach her late husband of 68 years how to dance, too.

In fact, most of Morrow’s family was musically inclined. Her mother played the mandolin, sister played the piano, brother played the trumpet and she played the violin. Even during difficult times, her family came together and enjoyed each other’s company.

Growing older, Morrow became interested in painting, the main medium she uses today. In her home in Sparta, several of her paintings, ranging from beach landscapes to portraits, line her walls.

“Any of (my paintings), they are just out of my mind,” Morrow said. “I can just see things that I want to paint.”

Over the years, Morrow has sold many of her paintings. She has also given some away to friends, family and even her doctors.

When she’s not busy painting, Morrow has enjoyed several girls trips with her family. One of her favorites was to Sedona, Arizona. Several paintings inspired by the red, rocky landscape and courtyards are displayed in her home.

Today, Morrow is working on an autobiography titled “Reaching Back.” She said her grandson asked her to chronicle her life several years ago; the book is a work in progress.

On June 27, Morrow will celebrate her 101st birthday.

A celebration of art and flowers, Art In Bloom events take place across the country, but it is thought to have originated in 1976 at the Museum of Fine Arts in Boston.

The Springfield Art Museum held its first Art In Bloom in 2018.