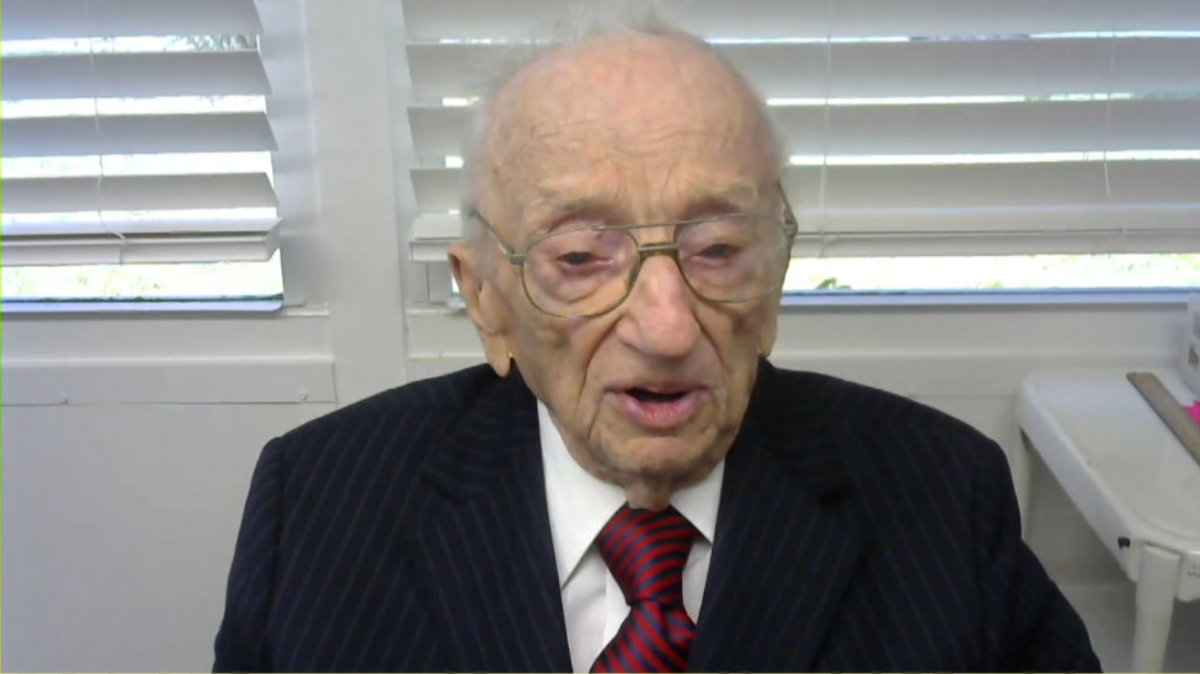 Benjamin Ferencz, now 102, fought in some of the most significant battles of World War II. He was a young lawyer, recently graduated from Harvard Law School, when he was assigned to a unit tasked with gathering evidence of the Nazi’s war crimes in Europe.

“It was horror. It was incredible and indescribable. My job was to get into the concentration camps as they were being liberated, so by the time I got there, the SS was fleeing. The American army was chasing them, and the ground was covered with dead people, some of them still partly alive, pleading with their eyes for help. All of them looked like they were starving. It was not only an unforgettable experience, it was completely traumatic, and I always have that picture,” Ferencz told CBS News.

He led a team of researchers that found a cache of German documents outlining the systematic mass murder of mainly Jewish people outside of the Nazis’ concentration camps, in the towns where they lived. At the age of just 27, he ended up prosecuting 22 leaders of Nazi units at Nuremburg for those crimes. All were found guilty.

“It was obviously so horrible that you can’t go away from that saying, ‘Well, that was a one-time shot.’ It’s been repeated again and again, and it goes on today. As we talk, people are being shot and killed who had nothing to do with the war [in Ukraine],” Ferencz said. “So, evils that I sought — Nuremberg sought — to correct, are still with us today, and we have begun to build a foundation which is more humane and rational, but we have a lot more to go.”

Ferencz has joined Ukraine’s foreign minister, former world leaders, and legal scholars in advocating for the creation of a special Nuremberg-style international tribunal to try the leadership of the Russian Federation for the war crime of aggression, which is the act of waging an illegal war.

Ferencz said it would be an important move “not only in the context of this case… but to state the principle that you may not commit aggression against a neighboring state, or anybody.”

In the case of Russia’s invasion of Ukraine — barring an extremely unlikely referral from the United Nations Security Council, where Russia has veto power — the International Criminal Court does not have jurisdiction over the crime of aggression, so a separate tribunal would be necessary for an indictment. And while culpability for other war crimes might not make it all the way up the chain of command to Putin himself, the crime of aggression could.

“Certainly he’s a war criminal. You don’t have to think too much about that,” Ferencz told CBS News.

As to whether Putin himself will ever actually face justice, Ferencz acknowledged, “that’s another question. Justice is a big term, for one thing. He’s a man who has been elected to office. He has supporters in the country.”

Ferencz offered a simple message to Putin: “Stop it… The use of force has really become obsolete in our time, because our capacity to kill has exceeded our capacity to help people, and we’ve got to turn that around.”

Ferencz said the world should turn away from using force in general, and rely on courts of law instead.

“We ought to recognize humanity should come first, and a more humane and peaceful world should be our goal, not a more powerful [world]. You have to be tolerant. You have to be patient. You have to be persistent,” he told CBS News. “When you get to be 102, you’ll say: ‘I knew a guy — 102 — and that’s what he was preaching. And you know what, he was right.'”